Aligarh is one of the more famous cities of Uttar Pradesh. It has been variously called ‘Mecca of Higher Education’ or even the ‘City of Locks’ or the city harbouring the traditional cultural manifestations of the Mughlai heritage. Aligarh bears the old-world charm of a long established city that has witnessed several generations of change and development and yet retained its ethnic traditions. Having an elevation of about two hundred meters the city spreads over an area of about four thousand square kilometers. 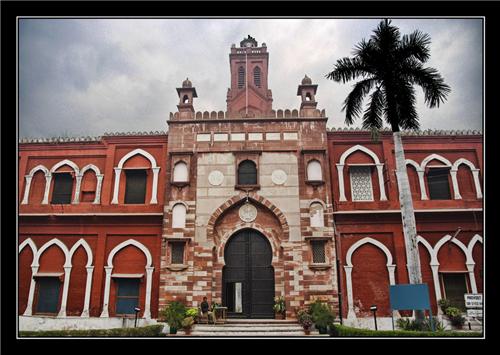 Aligarh has had a chequered history. Ranging from the mythological mentions of Balrama defeating a demon to save a sage named Kol to the invasion of Mohamad of Ghazni who was defeated by the Dor Rajput Chief called Hardatta who belonged to Baran. Then there are historical references of 1194 AD when the Khilji dynasty founder Qutb-ud-din-Aibak had invaded it. At that time Koil was mentioned as ‘the most impregnable fortresses of Hind’ and was also written about by Ibn Battuta in his treatise the ‘Rihla’. He had travelled with fifteen Mongol ambassadors of the Emperor of the Tuan dynasty. Ibn Batuta called it “a fine town surrounded by mango groves” which description earned for Koil the name of “Sabzabad” or “Green Country”. Under British rule Claude Russell took over as the Collector of the new district.

Later during the reign of Akbar and Jahangir it was established as a favoured hunting grounds for the emperors. During this time Surjamal, the Jat ruler took the help of Jai Singh of Jaipur and took over the area and called it Ramgarh. Then, a Shia commander, Najaf Khan took up its reigns and gave it the name of Aligarh which has persisted till date. Two interesting features of the town are the Aligarh Fort or ‘Qila’ which was built by French Engineers at the orders of their officers Benoit de Boigne and Perron. The second aspect was the memorials of the Battle of Aligarh fort in the two years of 1803 to 1805 within the precincts of the Aligarh Fort.

Read More about History of Aligarh

Presently Aligarh can be divided into five tehsils called Khair, Koil, Atrauli, Gabhana and Iglas, which have been further divided into thirteen blocks. The administration of the city is in the hands of the Aligarh Municipal Corporation. The head of the Corporation is the Mayor (who is elected) and he is assisted by the Municipal Commissioner (who is a member of the civil services). For maintenance of law and order the city of Aligarh has been declared the headquarters and is the administrative office of the Aligarh Police range as also the Aligarh Division which is headed by a DIG rank officer.

The city of Aligarh is located on an elevation of about six hundred feet above the sea level. It is a fertile and agriculturally rich land situated between the two major rivers of the country namely, the Ganga and the Yamuna. The Grand Trunk Road, the earliest highway of the nation passes right through the township. The presence of the two rivers gives the city a rich agricultural base where most crops thrive and the cash crops grown here are mostly rice, wheat, a number of pulses like black ‘chana’ or black gram as also there are huge groves of mango and other fruits as well. The region has both the kharif and the rabi harvests. Another intermediate cash crop is that of ‘moongphali’ or peanuts that is grown in large quantities in the area.

Aligarh has extremes of temperatures in both the seasons of summer and winter. The humidity is high in the monsoon and post monsoon months. The summer begins in may and culminates at the beginning of monsoon in June. Upto the end of September the monsoon and post monsoon humidity is most stifling. The average rainfall is around eight hundred millimeters every year. October to December is a most pleasant time. The winter months are from December to February touching the lowest temperature of as low as 5 degree Celsius. The mild winter is also tolerable and gives Aligarh an ideal climate for activities of all sorts.

Read More about Geography of Aligarh

Aligarh lays claim to being the ‘city of locks’ because the lock manufacturing industry is the most thriving part of its economy. The first lock firm was established in 1870 on a very small scale. Today it has grown to be a prosperous livelihood generating industry.

Another aspect of the metal ware crafting is the brass hardware and sculpture industry which has thousands of craftsmen , manufactures , exporters and wholesale are retail suppliers of products of metal like brass , bronze, aluminum and iron. Aligarh’s manufacturing and trading industry also thrives on its zinc die done in a multitude of pneumatic hot chambers and die casting machines. There are several units like the colossal Indian Die Casting Industries at the Sasmi Gate locality has the capacity and capability to take on international orders and serve their products in accordance with stringent quality control measures. There are several big players of the national and international economic sector to have located their establishments within and in the vicinity of Aligarh. These are Harduaganj Thermal Power Plant or the Kasimpur Power House, as it is popularly called, is located just fifteen kilometers from the city. On this road are also located the manufacturing units namely those of the Heinz sauce at Manzurgarhi, and the Satha Sugar factory. These are also the Ultra Tech Cement factory as also the Indian Oil Bottling Plants at Andla as also the wave distillery for Kingfisher beer located at Atrauli. Thus, economically Aligarh has been a long standing base for the thriving commercial centre. Read More

Some of the most prominent edifices of the city is the Aligarh fort. Along with it is the Dor fortress or its ruins which lie in the very heart of the city. As the very sight of the sigh rises the mosque made in the 18th century. The area is presently known as Uppar Kot.

Aligarh has been the centre of culture since the times of Akbar and even these days several organizations emit that are carrying on the region’s rich cultural heritage. These are Centre Point situated ‘Geetika’ as also the Durga Sanstra tile Kala Kendra and the Sanskar Bharti.During the month of January and February the grand cultural extravaganza called the Numaish is held annually at the exhibition grounds.


Place of Worship at Aligarh

There are several places of worship related to various religious followings in Aligarh city. These are several tombs of ancient saints of which the most famous is the tomb of the much celebrated Baba Barchi Bahadur which is situated in the Kath Pula area. These tombs are visited by people of all religions besides these tombs there are several temples old temples of the Hindus located in Achal Taal locality of the city. The area is proximal to the Dharma Samaj College.

These are two famous Jain temples. The Jain temple situated behind the Khurni Gate Police Station on the Agra Road. The other famous Jain Temple is virtually a sanctified pilgrimage or ‘Teerth Dham’. This Jain Temple is called the “ Mangalyatan Teerth Dham” is also situated on the Agra road. There is also a Sai Temple which is much worshipped by devout followers of Sai Baba. This “Sai Mandir” is located at Sarsol on the G.T. road.


Markets and Shopping in Aligarh

There are a number of commercial areas for shopping. Some of them are also product specific. While the markets on the railway road as also the Amir Nisha is the main thoroughfares for shopping. The grocery hub is located at Mahavir Ganj. Being an educational institutions majority city, Aligarh has two markets devoted to it namely the Shamshad market and the Achal Taal market. Both these markets are well-renowned for their book stores. Also the Centre Point market has been established as one of the best places for the purchase of branded goods especially garments.

Then there are the markets called Mahavir Ganj and Uppar Kot where all kinds of locks can be purchased. These books are of international quality and come in a wide range of designs, sizes and purposes.

Along with these there are a number of other markets that are the commercial hubs of Aligarh. These markets go by the names of Phool Chowk, Jamelpur market, Halwai Khana, Shamshad market, and Mohammad Ali road.

Read More about Shopping in Aligarh

The print and the electronic media, both have an established presence in Aligarh. These are three radio stations namely the Big FM, the All India Radio or AIR and the Mangalwaani. The newspapers also has a significant presence in Aligarh .The tabloids represented here and mostly in third including the Dainik Jagran, Hindustan, Pravada, Amar Ujala, Crime and police, Punjab Kesri, Avadh Nama and the DLA. Among the English Herald dailies, the Hindustan Times have recently set up their printing presses in Aligarh.

These are several social welfare organizations working actively in Aligarh. Some of them are of international and national level renown. These organizations are the Rotary Club, Bhartiya Seva Sansthan, the Manav Upkar Samiti, the Chetana Jagriti Punj, the Golden Group, the Kala Jagriti Samiti, the Welfare Trust, the Kulshreshtha Sabha and the Sanskar Bharti Ekta besides a number of other political based institutions and social work organizations.

The transportation mechanisms at Aligarh are well laid out. Transportation channels connect Aligarh to various other parts of the country and the world.

By air one finds that the international airport located at Delhi serves for commuting passengers to Aligarh. This airport is about a hundred and fifty kilometers from Aligarh. By rail Aligarh is well served through four major railway stations that are virtually located in the four cardinal directions. These railway stations include the Manfoorgarhi station, the Daudkhan railway station as well as the main railway junction at the Aligarh railway head.

Aligarh is a major junction that connects Delhi, the National Cap9tal Region with the entire eastern Indian region. There are about seventy trains from this junction daily. By road, the Aligarh city is well connected with other areas through the plying of government and private buses. The government transportation unit, the UPSRTC or the Uttar Pradesh State Road Transport Corporation operates several buses that connect Aligarh to the cities and towns of Uttaranchal, Himachal Pradesh, Madhya Pradesh and Rajasthan. These buses are regulated through the three bus terminuses namely the Aligarh depot bus station, the Masoodabad and the Inter-State Bus Terminus at Sarsaul. There are two National Highways that is number 91 and 93 as also the six lane Expressway between Agra and Noida which has been given the name of the Yamuna Expressway.

Being an old and established seat of erudition, Aligarh had been having its fair share of eminent personalities. To name a few of them: Irfan Habib, eminent Indian historian and Professor emeritus at the Aligarh Muslim University. Then there is Gopaldas Neeraj the Padma Bhushan recipient poet along with Qurratulain Hyder, the Padma Bhushan novelist, writer and journalist of Urdu writings. There is also Annu Raj Singh the celebrated international shooter besides a large number of luminaries of the art and culture scenario as well as the celluloid screen.