Aligarh – known as Kol or Koil during the historic time, is located in the south-east of the capital of Delhi and falls on the passage of the Grand Trunk road.

It houses one of the strongest forts constructed during pre-British era, Aligarh Fort, which is situated on the Grand Trunk road. 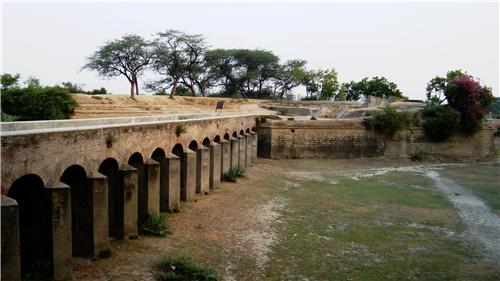 Known by many names Aligarh Quila or Baunasaur Quila or Ramgarh Quila, the Aligarh Fort was initiated by Muhammad, who was the son of Governor Umar, when Ibrahim Lodi ruled the city during 1524-25.

The Aligarh Fort has been in the authority of various rulers including Sabit Khan, Surajmal Jat in 1753; but achieved great importance during the reign of Madhavrao Scindia in 1759.

The Aligarh Fort saw expansion thrice under the instructions of lieutenant Banasaur, during the reign of Surajmal Jat in 1753, and included a basement, an explosives warehouse, and an air cooled kitchen.

The Aligarh Fort as we see it today is said to be the accomplished by the French engineers under the supervision of de Boigne and Perron.

The Aligarh Fort stands on a hill which is surrounded by steep ravines on all the sides at a height of about 32 feet.

The Aligarh Fort has a polygonal shape and has bastions on each angle, which is the major highlight of the fort.

Today, the internal part of the fort it forms a part of the department of Botany of the Aligarh Muslim University.

How to Reach Aligarh Fort

The Aligarh Fort is easily accessible from the city center which lies at a minimal distance of 3 kilometers, and the local transport in the form of taxi, cycle rickshaws, or Auto rickshaws will easily take you to the court.

By Rail - Aligarh Junction railway station is the nearest which is only 5 km distant.

By Air – Aligarh Airport being under construction, Indira Gandhi International Airport in New Delhi is the nearest airport at 148 kilometers.

There are various hotels situated near the Aligarh Fort from economy to luxury hotels, suited for every budget.