Aligarh is situated at a distance of about 140 km from Delhi, the capital of India. It is the seat of the district administration and a vibrant city in the North-Indian state of Uttar Pradesh. The town falls in the area of DOAB, which means a place between two rivers. This region was once called ‘kol’ for the tribe of the same name. It came to exist in its present form after the British annexation of the district in 1803. Aligarh is popularly called ‘the city of locks’ because of the large number of lock manufacturing units here. The city had been manufacturing and selling locks since 1890. Aligarh is also known for its brass, bronze, iron and aluminium products.

The place has a number of tourist attractions. Some of the major places of interest are listed below. 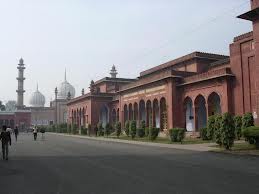 The famous Dor fortress is situated in the upper area of the city centre of Aligarh. It has lost its former glory with the passage of time but the magnificent ruins are enough to tell its story. It is believed that the fortress was built by Raja Budhasen Dor who was also the founder of the city of ‘kol’, which is called Aligarh today. The site of the ruins was once the court of Raja Budhasen.

These ruins extend up to the police ‘kotwali’ today. A large well, stables for horses and elephants are visible in its plan. The ruins of a tall minaret have a story of their own. It is said that the minaret was built by a Rajput ruler Mangalsen at the behest of his widowed daughter. She wanted to pass her days of widowhood watching the River Ganga. The top of the minaret was constructed to enable her to do the same. The well-planned layout of the ruins declares it to be one of the sturdiest and beautiful forts of yesteryears.

The Aligarh Fort is located on the G.T. Road at a distance of just 6 km from the centre of Aligarh Township. It is a wonderful example of the mix of the Indian and French style of architecture. The fort was initially erected by the son of a governor of Ibrahim Lodhi in the 16th century. The original plan of the court was changed in later years as and when the successive rulers felt the need for reinforcements. This constant tinkering was being done to make it stronger than before. As the result of this addition and changes the Aligarh fort has come to the present time as an example of one of the strongest forts of India.

It was successively used by the rulers of the area for various purposes. Late Madhavrao Sindhia used its large grounds to train his soldiers in the European tactics and methods of war. It was one of the centres of the revolt of 1857 by the Indian soldiers against the British. The grounds of the fort are under the care of the Aligarh Muslim University. The department of Botany manages the inner botanical garden. It is easy to see the fort after taking permission from the head of the department of Botany of the University.

The Dargah is a 600 years old symbol of communal harmony. People of all faiths pay homage to the Baba especially at the time of the annual ‘urs’ or the death anniversary of this Sufi saint. The devotees come here and tie a thread and pray to the saint to fulfil their wish. Once the wish comes true the devotee comes again to untie the thread. It is believed that Baba Barchi Bahadur fulfils the wishes of everyone. The Dargah is situated near the Ghantghar circle of Aligarh close to the Ambedkar Park and the Aligarh Railway Station. 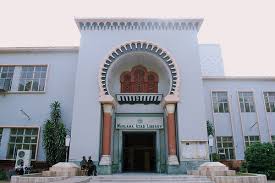 It is hailed as the largest library in terms of books and periodicals in the country. It also enjoys being the second largest in Asia. It has been stocked with rare books and manuscripts for a long time. This helps the post graduate and doctoral candidates in their study and research. The library is a part of the Aligarh Muslim University but scholars from anywhere can use the facility for the spread of the cause of research and education. The library has a central complex along with 80 different departmental libraries on various floors of the complex. The library is not only rich in stocking the books of educational nature but also of our culture and history. It is also one of the most beautiful places to visit when in Aligarh.

Dedicated to Lord Shiva, this temple has an interesting tale to tell. It is believed that the complex of the temple was completed in a day after the enshrining of the Linga. This place is considered as one of the holiest shrines of the area. The temple is replete with beautiful carvings, engraved murals on its ceiling and a beautiful architecture in The Hindu architectural tradition. The temple is situated in the Tajpur village at a distance of about 5 km from the centre of the town. It is connected to the NH 91 through the Khair by-pass road. The temple has several beautiful idols of Hindu deities.

Aligarh boasts of a conservation reserve of its own kind situated at Nagliya. It is a small village on the G.T. Road at a distance of about 15 km from Aligarh. The widely spread park is dedicated to the conservation of the Black Deer and other native wildlife species. The People of Nagliya have a good level of awareness for conservation that coincides with the high rate of literacy in the village.

This is a unique museum in Aligarh. It exhibits illustrations of a historical nature depicting health issues, history of health and diseases with a cultural perspective of all such issues. The museum exhibits the practice of medicine through history. Those who visit the museum feel spell bound to watch the invaluable materials, sculptures and pictures of the Greek, Mesopotamian Egyptian and Arabian civilizations as they practised medicines in those eras.

Situated at a distance of 17 km from the centre of Aligarh, the lake is spread along an irrigation canal. The lake supplies water to the town. It is famous for its bio-diversity and a place for the migratory birds in winter. A variety of geese, ducks and other migratory birds can be seen in winter at the lake. People visit the place for its natural beauty as well as for bird watching in the season.

This unique Jain establishment is situated at a distance of 5 km from the town on the Aligarh-Agra Highway. It is spread over an area of 16 acres and is dedicated to the Jain culture, religious beliefs and research. The temple complex is unique in its devotion to not only the Jain religion but the socio-religious issues of the period and how to research and tackle the same. There are four temples dedicated to traditional worship in the large complex.

It is a small but exquisite gallery and museum situated at the Three Dots School Complex. The museum was founded in 1982. It was dedicated to the late PM, Pandit Jawaharlal Nehru, who was popularly known as ‘Chacha’ or uncle by the children of India. The numismatists, philatelists, botanists and geologists enjoy the museum because it has a good collection of the items of their interests like coins, stamps and specimen related to biology, history and geography.