Aligarh is a north Indian town famous as ‘Taala Nagri’ - the city of locks. It bears this fame because locks are being made in Aligarh since the Mughal period. The Britishers organised the lock-making to provide it the status of a prominent industry of the area. The town is situated conveniently on the side of G T Road that gives it great connectivity. It has a number of places nearby that can serve perfect weekend getaways for those who wish to enjoy a break from the hustle and bustle of Aligarh. A list of some tourist attractions for a weekend getaway is given below. 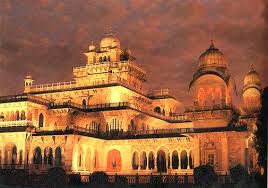 The pink city of Jaipur is one of the cities of the golden triangle of Agra, Delhi and Jaipur Tourist circuit. It is a historical town. It is the capital city of Rajasthan. Jaipur is connected with Aligarh through road. The city is situated right in the heart of the Great Indian Desert of Thar. It has been a witness to the history, culture and lifestyle of Rajasthan through ages. It was founded in 1727 by Sawai Raja Jai Singh. Forts and palaces, wide avenues and great gardens, architectural marvels and wonderful museums make Jaipur a prime location for tourists. It is connected to Aligarh via NH 11B/SH 39 at a distance of 287 kms. The journey period in a personal car or hired taxi is about 5 hrs.

This heritage site falls within Dausa district in the state of Rajasthan. It has yet not been trampled by an influx of unbridled tourism and maintains its old-world charm. Its pristine glory emanates from the hills and forests surrounding it. Kalakho has a lot of ancient forts and old temples to visit. This place falls on the route connecting the golden tourist circuit of Delhi, Agra and Jaipur. It is home to an 8th century historical temple, the fort Madhogarh now converted into a heritage hotel, the Chand Baoli-deep underground well with steps to reach the water and the temple of Harsha Mata prominently worshipped far and wide in Rajasthan are some of its many tourist attractions.

The visitors can enjoy the exhilarating experience of the camel cart ride in a desert safari of its own kind. The place affords a wonderful experience of stay.

The place is well connected with train, road and air. The best conveyance to go there will definitely be own car or a hired taxi but the trains from Jaipur serve the area as the Sanganer Airport serves it by air.
The best time to visit Kalakho is October to March when the weather is comparatively mild and enjoyable. It is approachable by road via Mathura, Bharatpur on the RJ SH 22 and SH 80 or via NH 509 and SH 39 at a distance of about 219km. The journey period is 3 h 55min only.

The city of Karauli is one of the most famous places of Rajasthan. It is a pilgrim centre. Those who are religiously inclined can visit the place. The town has a glorious past. It was the capital city of the erstwhile state of Karauli. The Kaila Devi temple situated on the banks of the River Kalisi is the main attraction of the area today. Thousands of devotees reach here from even a distance of even 2/300 km on foot to seek the blessings of the goddess. The temple is a marble structure with a huge courtyard. A Kaila Devi fair is held here in Chaitra month of Hindu calendar for a 2-week duration.

The place is accessible via RJ SH 1/ SH 80. It lies at a distance of 213 km from Aligarh and a 3 hrs journey by car or 4 hrs by state transport bus is possible.

Gwalior was the seat of the Scindia rulers and one of the most prominent cities of the Madhya Bharat in the past. It has witnessed the rise and fall of the rulers of various clans. Its magnificent monuments are worth a visit any time. Its history can be traced back to 08 A.D. It is said that the ruler of the area Raja Suraj Sen fell sick with some deadly disease. A hermit by the name of Gwalipa cured him. A grateful Suraj Sen founded the city of Gwalior in memory of the hermit.

The place had been a treasure trove of Indian culture emanating from the Maratha clans that ruled the area for the longest period. The British influence helped in the modernisation of the city in later years. It has been home to several famous poets, musicians and kings. Some of the main places to visit are the Gwalior fort, Teli ka Mandir, Jai Vilas Palace, Gujri Mahal museum, Tansen’s tomb, mausoleum of Ghous Mohammad and the memorials of Rani of Jhansi and Tantya tope the famous freedom fighters of the area.

Gwalior is accessible through bus, train and personal vehicles at all times of the year via NH 3/SH39. It is situated at a distance of 208 km and reachable by car within a short drive of 3h 45 min.

The city of Dhaulpur in Rajasthan is famous for its wonderful historical sites. It is said that the area of Dhaulpur was ruled for 18 generations by Suryavanshi Kings before lord Rama. Dhaulpur was the seat of the Jat rulers of great fame like Rana Ram Singh succeeded by Rana Nihal Singh and later his son Rana Udaybhanu Singh.

Some of the tourist attractions of the area are The Nihal Tower built by Rana Nihal Singh; the Muchukund Temple with which the stories of the divine powers of Raja Muchukund are associated; the 18th century Shiva temple towards the Dhaulpur bus stand; the Buddha temple of Sant Nagar and the Sher Sikhar Gurudwara associated with the legend of the 6th Sikh Guru Hargovind Singh and the famous fort constructed by Ser Shah Suri.

The place is situated at a distance of merely 146 km from Aligarh. A bus journey of 3 hrs is needed to reach Dhaulpur easily while a private car can make the distance in only 2h 30 min.

Nestled in the midst of the Low hills of the Aravali range with green forests, splendid waterfalls and a wildlife reserve, a beautiful lake and all the peace and serenity of nature, Alwar in Rajasthan is a wonderful weekend getaway. It is a major tourist destination of Rajasthan also because it lies very close to Delhi and falls on the RJ SH 14 and SH 80 that further leads to other major cities of Rajasthan.

The city is home to historical sites like Bhangarh known as Ajabgarh, Bala Fort, Moti Doongri, Dadhikar Fort and the City Palace Alwar. The place houses a great museum of historical artefacts including the sword collection of the Rajput rulers of the past. The Sagar Lake is a very good place to visit. If time permits the Sariska tiger reserve is one of the great places to visit near Alwar. The place has mythological association also. It is believed that this is the same area where the Pandavas had come to hide in their 13th year of exile. One of the conditions of the exile stated that if the Kaurawas were able to find the Pandavas in the 13th year the whole exile period of 12 years will re-start from zero.

Alwar is linked by road from Aligarh. It can be reached by rail also through Delhi. The city is at a distance of 178 km and reachable in 3 hrs by a car or private vehicles. 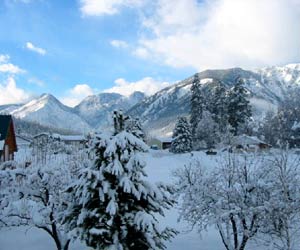 The famous hill station of Nainital in Uttarakhand is another place for a week end foray. It is a wonderful tourist attraction in almost all the seasons. There are plenty of places of interest in Nainital besides being a picturesque place to visit. Nestled amidst the hills of low and high rise above the sea level the tourist place is famous for the scenic beauty, greenery and nature walks other than the regular places of tourists’ interest.

Some of these places are the Naini Lake, Tiffin Top, the Gurney House which was the residence of the great nature lover Jim Corbett, The Snow View Point, Guano Hills, Malital, Bhimtal the Land’s End, the Kilbury Bird Sanctuary, Sri Aurobindo Ashram and The Himalayan Centre.

Nainital is reachable at a distance of 246 km via MDR 65 W. It is reachable within 4 h 30 min in a personal vehicle or hired taxi. There are public buses available for those who do not mind taking almost 6 hrs to reach the place. Train link is available up to Kathgodam railway station only. Taxi services are available from there to Nainital.

This is one of the most prestigious and oldest tiger reserves of India. It was established in 1936. The driving force behind the establishment of the tiger reserve was the great hunter turned conservator Jim Corbett. At first it was called the Hailey National park. It was created with the aim of saving the royal Bengal tiger. It was later named after Jim Corbett to honour his services in saving the tiger from extinction. The park is known for its bio-diversity with 488 different species recorded in its project area.

The park is reachable via SH 49 up to Kalagarh Road within 4 hrs at a distance of 228 km and thence to the Park within 20 min at a distance of 16 km. the route is good for all kinds of public transport like state transport buses, private cars and taxis.